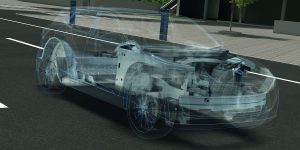 Using the Scalebase method, only the distance between the front wheel and the heel point (the point at which the driver’s heel touches the floor of the interior) of the electric vehicle is firmly defined. All other length measurements, as well as the width, are variable. Since the platform can also be adapted to local requirements, factory planning or the general design of the vehicle, the manufacturer should be able to “cut at least three to four months off the development period and significantly reduce their budget”.

“Considering how fast the technology of electrically powered vehicles is developing and the time and cost pressures that startup OEMs, in particular, are under, we offer a valuable time advantage,” said Martin Hillebrecht, Head of the EDAG Competence Center. The service provider names both established manufacturers and startups as target groups.

The electric drives and battery systems are integrated into the floor assembly, which mainly relies on steel profiles. This should be possible for different power levels and battery modules. During development, it was important that the later vehicles could be used internationally, i.e. that they had to be designed for a large number of current and future crash requirements. With this flexibility, the platform allows a manufacturer, for example making cars for Europe and Asia, to develop different cars that better meet the respective customer requirements, while the technical complexity should remain low.

An undisclosed customer is said to have already opted for the EDAG floor group. “Immediately after the concept phase, development work was begun on a vehicle for a new manufacturer,” says Michael Schäfer, technical project manager, in the press release.