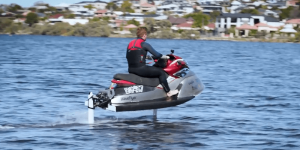 In Western Australia, the first electric hydrofoil jet-ski called the WaveFlyer has been developed. A prototype that can be seen flying above the water below.

The WaveFlyer has been developed by the Renewable Energy Vehicle Project (REV) at the University of Western Australia (UWA) with technology partner, startup Electro.Aero.

When the WaveFlyer is stationary, it looks much like a regular jet-ski. But as you’ll see in the video, once it gets going, the vessel rises above the water using an actively stabilised hydrofoil propulsion system. The speedy personal vessel is powered by 2 kWh lithium-ion batteries, which gives it 30 minutes of water fun when carrying two riders.

“The new WaveFlyer feels more like flying above water rather than riding a conventional jet-ski,” says UWA REV Director Professor Thomas Braunl. “I can see tremendous commercial potential for this eco-friendly watercraft,” he continued. Chief Technology Officer and Co-founder of Electro.Aero Joshua Portlock said the technology was not only environmentally friendly, but it would also improve the safety, experience and efficiency of personal watercraft.

However, it seems that the most significant breakthrough is that the technology has potential applications for a variety of different watercraft. “We are very excited about the WaveDrive stabilised hydrofoil electric propulsion system we developed for the WaveFlyer prototype, as it is a technology that could help revolutionise the watercraft industry,” Portlock says.

As is usually the case with innovative electric motorisation prototypes, developing the WaveFlyer has taken a concerted effort from a number of players. In addition to the efforts of technology partner Electro.Aero, support for the project has included funding from lithium producer, Galaxy Resources, the West Australian University’s School of Engineering and Innovation Quarter, and support from electronics companies Altronics, Nvidia and X-Sens.