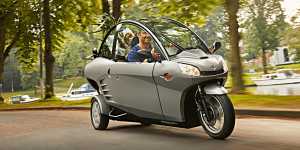 The Dutch tricycle-car with tilting technology is celebrating a comeback with an electric drive. The electric car, or quad rather, which will be available in autumn, will be cheaper than its fossil-fuelled predecessor, at around €8,000.

The first Carver was powered by a Daihatsu three-cylinder combustion engine and was discontinued in 2009. However, with the new electric three-wheeler, Carver has not simply switched the motor but has also changed the concept and orientation of the two-seater. Previously, with the 50 kW combustion engine, the Carver One was supposed to be able to replace a car in almost every situation. Given a price of nearly 60,000 euros, only 200 buyers were found between 2007 and 2009 – which is why the project ended in insolvency.

In the ensuing time, Carver kept itself alive by selling this tilting technology, and now similar technology is used in three-wheeled cargo bikes. Carver’s tilting device is called Dynamic Vehicle Control, or DVC. Hydraulic mechanisms can lean the body up to 45º to counteract the side load, making the vehicle more stable. The big difference between the old and the new Carver is an overall reduced energy usage: from 50 kW of the combustion engine in the original version, the late Carver now uses two electric motors each using only two kW. Carver has limited the maximum speed to 45 km/h. The slim, covered vehicle weighs 330 kilograms and has a range of 100 kilometres.

With a width of just 88 centimetres, the Carver is built to serve as a commuter vehicle in the city. This means it has similar advantages to a motorbike in heavy traffic, only slower, with the benefit of being covered or open as the driver so desires. The battery (5.3 kWh) located at the rear can be charged in 6.5 hours at a household socket.

The e-Carver has enough space for two adults sitting one behind the other. Also, some luggage can be stowed in a small boot of 75 litres. The roof above the grille frame can be opened, turning the e-Carver into a kind of Targa. Drivers will at least need a scooter license to drive the new Carver.

Update 02 October 2019: Carver has now started production in the Dutch town of Leeuwarden, and already delivered the first electric trikes to customers. Through its subsidiary Velosophy, the Accell Group holds a 40 per cent stake in Carver.