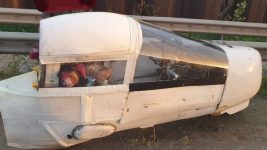 The British police stopped what they considered a most unusual vehicle as it just turned on the M25 motorway. Later reports described it as a “homemade electric motorcycle” that was all registered but looked like it was made from “balsa wood and duct tape”.

While the vehicle doesn’t have the glossy finish you’d see on a Tesla or an Audi, we do applaud the initiative it takes to actually build your own EV. As the driver was stopped by police who were evidently looking for a reason to shut down the homemade electric motorcycle, it was revealed the design is actually up to code, meaning that you can still see it on the roads around Hertfordshire: “This is certainly not a vehicle that is seen very often on our roads but after road side inspection we couldn’t find anything that would prevent the rider to continue his journey.”