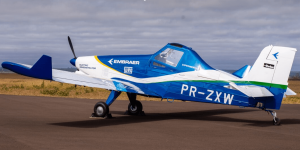 The Brazilian aircraft manufacturer Embraer converts its agricultural plane EMB-203 Ipanema into a fully electric aircraft. Now the prototype has been presented, which will take off for its maiden flight next year.

A six-cylinder 240 kW engine usually powers the EMB-203 Ipanema. Shortly before the company’s 50th-anniversary celebrations, an electric version was announced. The presented prototype was already painted accordingly but had no propulsion system yet.

This is to be supplied by WEG. The electric EMB-203 is the first project from the cooperation between the two companies signed in May. Embraer and WEG want to push ahead with the electrification of aviation within the framework of this cooperation and above all carry out basic research for this purpose. The first step will be to develop the necessary technologies and then to improve energy efficiency, according to communication.

In contrast to its competitors, Embraer had been reluctant to invest in electric aircraft for a long time and had initially opted for biofuels. Airbus has been researching e-planes for some time and Boeing is also working on various projects. But the engine suppliers are also working on this topic: Rolls-Royce has therefore taken over the electric flight division of Siemens.