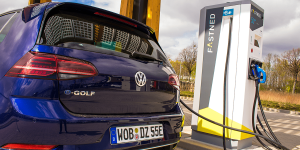 + + Kindly find all updates to this article below + +

In Germany, the electric city car now costs only 31,900 euros instead of 35,900 euros according to the configurator. The base price in Germany will thus fall by 4,000 euros.

In spring 2017, the German carmaker subjected the e-Golf to a model upgrade. This also included a significantly larger battery for greater electrical range. And it is still being built, configured and ordered. It is still unclear when production will end. The VW Golf 8 is already in the starting blocks. However, this model will not be launched on the market as a purely electric version. The role of the e-Golf will instead be played by the VW ID.3.

In the UK, according to website configurator, prices are still at 33,840 pounds (currently a good 37,300 euros), which is still the old price. Stay tuned.

Update 02.09.2019: Volkswagen has now officially confirmed the lower price in the UK for the e-Golf: Volkswagen UK has reduced the price of the e-Golf to £31,075, which equates to £27,575 after the Government’s Plug-In Car Grant. the 8% markdown will go into effect immediately.

2 Kommentare zu “Prices to drop on the VW e-Golf”