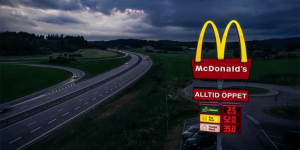 In Sweden, the digital displays showing charging prices have been developed by the Nord DDB agency can be found at the McDonald’s restaurants in Mjölby and Munkedal.

“McDonald’s has a strong history of being involved in the development of charging infrastructure along Sweden’s roads,” said Christoffer Rönnblad, marketing director at McDonald’s Sweden. “More and more people are choosing to travel by electric vehicles, and we want to be a part of this trend by inspiring good choices. Our sign is a new and fun take on a classic way of doing just that.”

So far, McDonald’s has set up 55 charging stations for electric cars across Sweden. This seemingly fortuitous prospect has already been taken up at MacDonalds branches with Vattenfall in the Netherlands too. Using the prominent signage seems like a win-win.

It makes sense, MacDonalds has established itself as the global market leader in fast-food along highways. Elon Musk played with the idea last year saying he would hook-up the 50s diner idea with charging stations. This would require of course a whole new business. One dedicated Tesla fan even sculpted a Supercharger to look like a good-old-says 50s petrol pump at their roadside ice-cream parlour.

MacDonalds is perfectly situated to capitalise on its existing infrastructure, now they can capitalise on the need for visible charging stations with their Golden Arches logo.  The logo resembling an “M” for “McDonald’s” was introduced in 1968 and is now widely regarded as one of the most recognisable logos in the world. If the Golden Arches become synonymous for charging station, EV drivers will have a very prominent signage to help find a quick charge. Somehow, I can’t imagine that fossil fuel filling stations are very happy about this development.

Kalashnikov shoots for another BEV