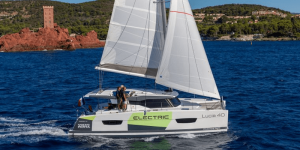 At the Cannes Yachting Festival, Volvo Penta and Fountaine Pajot presented the prototype of an electric sailing catamaran. The electric propulsion system will take over from the diesel for entering and leaving the port.

The Lucia 40 model from Fountaine Pajot was equipped with an electric propulsion system from Volvo Penta that delivers 30 kW of power. The two batteries, each with a capacity of 20 kWh, are to be charged within three hours.

The prototype was developed against the background of “the increasing interest in emission-free boating”, as Volvo’s communication states. Volvo designed the drive specifications using Fountaine Pajot’s extensive database. In the database, the boatbuilder has recorded the real driving cycles of many of his customers. “The input on customer usage from Fountaine-Pajot is critical to the electric system’s design,” says Peter Granqvist, Chief Technology Officer at Volvo Penta. “Having identified user profiles, we can more accurately predict aspects of the system, like the battery lifetime, which in turn provides increased peace-of-mind to a user or captain.”

Now, to the technical data: Each of the two electric motors has an output of 15 kW, which should enable a maximum speed of eight knots. That is close to 15 kph, and at this speed, the current should be sufficient for one hour. At five knots, Volvo Penta states the range at 27 nautical miles. The prototype is also equipped with Volvo Penta’s EVC 2 electronic ship control system.

In practice, the engine is supposed to offer more power and torque at lower speeds than a comparable diesel engine – no wonder with the characteristics of an electric motor. The stored electricity will last for up to four hours or 20 nautical miles, which is enough for the “typical scenario” of arriving and departing in ports, says Volvo. The propulsion system also makes it possible to “sail” into areas closed to combustion engines.

Alternatively, the power of the propulsion system can also be used for amenities on board. On hot days, for example, the air conditioning system can fall back on the batteries without the ship’s diesel engine or generator having to run. This guarantees “not only a better nature experience but also a restful sleep”.

The electric sailing yacht is not yet available for purchase. With the prototype and the demo trips during the Cannes Yachting Festival, the two partners first want to collect feedback from users and boat builders.