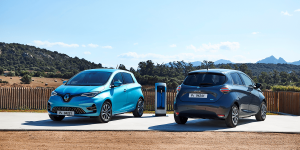 Renault is about to open the order books for the latest iteration for its best-selling electric car. The new Zoe will be available to order from mid-September, with prices starting at just £18,670 before battery rent. Customer deliveries will begin in January 2020.

Renault considers the third generation “major milestone”, seven years after the release of its first model.

In the UK, pricing and technical specifications read as follows: a WLTP range up to 245 miles, using a 52 kWh battery, an increase of 32 per cent over the previous 41 kWh pack. Faster charging is now also available up to 50 kWh DC, which allows for 90 miles of range per 30 minutes of charging, according to Renault. The CCS charge port is located behind the Renault logo, and the new plug is slightly larger than the previous one and consists of both a European standard socket and a two-pin connector for DC charging. When using a 7kW wall box that Renault supplies as standard to customers, the new Zoe can charge from 0 to 100 per cent in nine hours and 25 minutes.

Renault offers two motor options, the R135 100 kW motor as well as an entry-level R110 80 kW motor and the inclusion of a new B mode urban driving setting.

Prices start at £18,670 after subsidies, ranging up to £25,670 for the fully outfitted vehicle. In Germany, prices start at 21,900 euros. Renault will begin accepting orders in mid-September in Europe, with deliveries expected to start in January 2020.