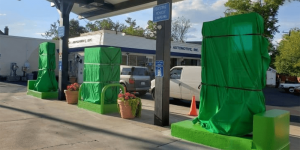 In Norway, the petrol station chain Circle K converted its first station to completely do away with fossil fuel dispensers and install six fast-charging stations for electric cars. In the Nordic country, one-third of the “energy stops”, as Circle K has recently called its petrol stations, are to be equipped with charging stations. In 2020, 100 locations are to accommodate around 500 charging points in this way. Norway has notably the highest uptake of electric vehicles in the world, but the gas station owner in Maryland showed that places with lower density of EVs have enough reasons to make the transition too.

In the USA, Depeswar Doley, the owner of a local gas station in Takoma Park, was motivated by a number of different factors to make the switch. Firstly, he was frustrated with limitations of contracts being offered by oil and gas companies, secondly he noticed that available local charging stations were not meeting demand, since the two charging stations available were overwhelmed with EVs lining up to charge. The final straw came from the Doley’s daughter – a high school student – convinced him that taking the business risk was also important for the environment.

Doley told CNN: “What I’m doing, maybe it will encourage other businesses owners and encourage the electric car business.” Some of the financing required for the conversion was provided by the Electric Vehicle Institute and Maryland Energy Administration. Governor Larry Hogan said: “Maryland is proud to be a national leader when it comes to clean and renewable energy, climate change, and the promotion of electric infrastructure and vehicles.”

Doley’s station will now feature four charging points that connect to a 200kW system, allowing four vehicles to charge simultaneously and reach 80% battery charge in 20 to 30 minutes. An automated convenience store provides a little human recouperation where screens are installed so drivers can track their vehicle’s charging status.

Are carmakers banking on EU Supercredits with delays?