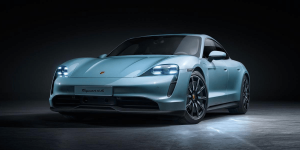 The new entry-level model is available with two battery sizes, enabling ranges of up to 407 and 463 kilometres respectively. The Taycan 4S with the smaller battery delivers up to 390 kW and up to 420 kW with the larger battery. The latter corresponds to the well-known battery from the Taycan Turbo and Turbo S with 93.4 kWh gross capacity (83.7 kWh net) introduced in September. The smaller battery dispenses with the modules of the larger version that are partially arranged one above the other and is therefore flatter. Porsche states the gross capacity in the announcement as 79.2 kWh, a net capacity is not mentioned – the surcharge for the “Performance Battery Plus” is 6,521.20 euros.

As with the two turbo versions, the Taycan 4S uses a permanently excited synchronous motor (PSM) on both the front and rear axles. The difference in performance to the two top models is not only due to the power electronics, at least on the rear axle Porsche uses a different drive. This is 80 millimetres shorter than the PSM from the Taycan Turbo but still has the two-speed transmission. Porsche does not go into the performance values of the new drives.

Both 4S variants accelerate to 100 km/h in 4.0 seconds, i.e. 0.8 and 1.2 seconds slower than the Turbo and Turbo S respectively. The top speed is 250 km/h, which is also the same. The range is up to 407 kilometres with the smaller battery and up to 463 kilometres with the large battery, both measured according to WLTP. There are also differences in the maximum charging power: this is 270 kW for the “Performance Battery Plus” and 270 kW for the turbo models, the smaller standard battery has a peak charging power of 225 kW.

Optically, the Taycan 4S hardly differs from the two previously presented variants. The small air intake at the front has a different design, the side skirts and the rear diffuser of the 4S are black. In addition, the brake calipers in the Taycan 4S are painted red and it also has aerodynamically optimised 19-inch rims, while the turbo wheels are up to 21 inches in size.

The interior of the Taycan 4S is equipped with partial leather as standard, full leather can be ordered at an extra charge. In the Taycan, Porsche is also offering a completely leather-free version for the first time. The interior is made of innovative recycled material to underline the sustainability of the electric sports car.

According to the announcement, the Taycan 4S can be ordered immediately and will be available at dealers in Europe next January. In Germany, prices start at 105,607 euros – a proud 46,529 euros cheaper than the Taycan Turbo. In the US, the Taycan 4S starts from 103,800 US dollars.