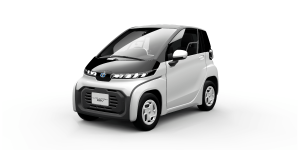 In the corresponding press-release, Toyota describes the new model as an “ultra-compact battery-electric two-seater”. With a range of about 100 km, a top speed of 60 km/h and a very small turning circle. The car is designed for electric short-distance mobility in urban areas – and for the ageing population in Toyota’s home country.

“We want to create a mobility solution that can support Japan’s ageing society and provide freedom of movement to people at all stages of life,” said Akihiro Yanaka, Head of Development. “With the Ultra-compact BEV, we are proud to offer customers a vehicle that not only allows for greater autonomy but also requires less space, creates less noise and limits environmental impact.”

At the Tokyo Motor Show, the Japanese carmaker had repeatedly shown small all-electric concept cars, such as the i-Road, in the past. But so far none of the concepts have gone into series production.

In addition to sales to private individuals, Toyota also wants to investigate other applications for the two-seater – for example as a mobility service for municipalities that want to create “environmentally-friendly transportation options in urban or mountainous communities”. According to Toyota, the company has worked with more than 100 companies and authorities to date to illuminate new traffic models for ultra-compact electric cars.

With the planned sales premiere of the ultra-compact BEV, Toyota also intends to introduce a new business model “that aims to promote the wider adoption of battery electric vehicles in general”. These will be special leasing models designed to maximise the value of the battery at every stage, from production, through use in the car, to sale, re-use and recycling.

In addition to the small electric two-seater, Toyota will also present the second generation of the Mirai fuel cell car at the Tokyo Motor Show. Officially it is still a concept car, but the car on the new TNGA platform looks just about ready for series production on the photos published so far. The Japanese company will also be showing another concept car in the form of the LQ. The LQ is the next generation of the Toyota Concept-i, which was presented for the first time at CES 2017. The electric concept features Level 4 autonomous driving capabilities.

Update 10.02.2020: Now more details about the battery business model that Toyota wants to pursue in connection with the small electric car are emerging. As reported in the Nikkei Asian Review, Toyota apparently plans a standardized reusable battery with only about 8 kWh capacity, which should be easy for household use. A four-person household should be able to use the battery as an emergency power supply for around three days – in combination with solar panels, this should last correspondingly longer.

It looks like the battery will probably become part of a kind of leasing model: the vehicles themselves will be sold via leasing with fixed test dates for the battery, which will be replaced if necessary. What the service will cost has not yet been revealed.