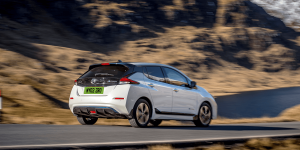 The introduction of special number plates would give local authorities a useful visual label if they wanted to create incentives for electric cars, for example by allowing the use of bus lanes or cheaper parking.

A side effect would be better visibility and perception of “zero-emission vehicles”. “As the UK moves at pace towards net zero emissions, the initiative aims to raise awareness of the increasing number of zero tailpipe emission vehicles on UK roads,” said the Department of Transportation (DfT).

According to the government’s announcement, the announcement marks “another milestone for the Road to Zero Strategy,” which is funded with £1.5 billion. “By increasing awareness of these vehicles and the benefits they bring to their drivers and our environment, we will turbo-charge the zero emission revolution,” said Transport Minister Grant Shapps.

The exact design of the license plates has not yet been determined. The proposals apparently range from a completely green number plate to a green bar at the edge of the traditional yellow number plate or a green dot or symbol such as a flash.

Resistance has also been forming against the plan. As in similar discussions in Germany, bus operators are not very pleased that in future they may have to share bus lanes with electric cars. “If local authorities allow some cars to use bus infrastructure, which is already severely strained and in need of significant investment, we will simply increase congestion for bus passengers and drive people off the bus and back into cars the vast majority of which are not electric,” said Graham Vidler, managing director of the bus industry’s trade committee told the BBC.

And the project is also controversial among the electric car drivers themselves. The green license plate could also encourage “foster resentment among existing drivers of petrol and diesel vehicles,” said Nicholas Lyes of the English automobile club RAC. “On the face of it, drivers we’ve questioned don’t seem too impressed – only a fifth think it’s a good idea and the majority said the number plates wouldn’t have the effect of making them any more likely to switch to an electric vehicle.”