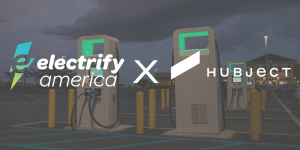 Hubject and Electrify America just announced the introduction of Plug&Charge in North America for 2020, after both companies had already signed a strategic cooperation agreement for this purpose in January of this year.

In fact, Hubject will provide the American Volkswagen subsidiary with its expertise in implementing the international ISO standard 15118 on the North American market, the most common application of which is known as Plug&Charge.

Hubject had already announced the cooperation with Electrify America in January of this year. This project is now becoming concrete. The technology called Plug&Charge, which professionals also like to call the corresponding ISO standard 15118, is known to lower the charging threshold, making it simple and future-proof.