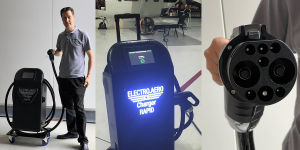 The Australian company Electro.Aero has developed a DC charging solution especially for electric aircraft. The portable Electro.Aero Charger Rapid 30 delivers a charging power of up to 30 kW. The first customer is the US aircraft company Ampaire.

The e-plane charging device from Electro.Aero should be able to handle voltage levels from 300 to 1,000 volts – depending on the infrastructure at the airport. A special feature compared to DC charging stations for cars is the height. “There are plenty of electric car chargers but they are permanent installs and are very heavy and tall – it can be difficult getting a wing over it,” said Electro.Aero co-founder Joshua Portlock in an interview. “We’ve made it intentionally low enough to fit under most wings.”

First customer Ampaire builds its hybrid aircraft on the basis of a Cessna 337, the wings are mounted at a height of about two meters. Since many of the DC fast chargers from the car sector are built in such a way that they can be seen from a distance at motorway service stations, they are too high. The Rapid 30, on the other hand, is more similar in size to an industrial vacuum cleaner or a small steam cleaner. As it stands on wheels, it can be pushed close to the aircraft inside the hangar or on the runway.

According to the founder and CTO, the charger is designed to connect to a 50 amp three-phase wall outlet. “The main focus on is getting the most power they can practically pull off a wall connector, so it’s portable they can take it to different hangers and it’s more flexible,” says Portlock. For the connector itself, Electro.Aero chose the Chinese GB/T standard because it was more compact and cost-effective.

Ampaire announced its first order for 50 hybrid aircraft in June. Electro.Aero and Ampaire are also working with other industry players on the SAE AE-7D Aircraft Energy Storage and Charging Committee to develop the SAE standard AS6968 for conductive charging of electric aircraft.