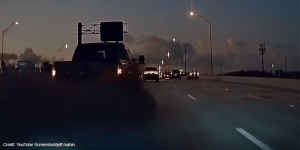 Now a Tesla driver has uploaded a video of a truck driver engaging in dangerous manoeuvres to “own the libs”. In the video the truck driver can be seen cutting across several lanes of traffic, endangering far more than the environment with their reckless behaviour. We hope that due process is followed with this clearly unacceptable road behaviour and this driver doesn’t get to see the back of a steering wheel in quite some time.

A workable electric bike-scooter folding to A3 size