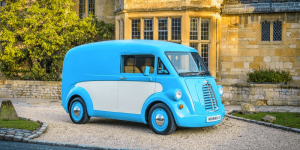 Britain’s own Morris Commercial presents a new electric edition of the Morris J-Type small van produced in the 1950s. The legendary e-van, now named Morris JE, will offer a range of around 200 miles (320 km) and cost about 60,000 pounds once it goes on sale at the end of 2021.

While keeping the retro-looks, the electric van is sitting on a whole new modular platform that will help transform Morris Commercial into an all-electric brand, starting with the transporter.

The Morris JE features a 60kWh lithium-ion powertrain said to give it a “power-to-weight efficiency that fully maximises the range of the vehicle”. It can fast charge to 80% in 30 minutes. Morris Commercial’s first production model since the 1960s has a 200-mile range, a 1,000kg payload and a 2.5-tonne gross weight. Top speed is set at 90 mph (145 kph).

It is about all the detail Morris Commercial provides this far. Backing comes from some unnamed UK and European financiers, and the company has yet to disclose the production location with the design and engineering taking place in a facility in Worcestershire. Morris Commercial did position itself, however, as the only all-electric brand that uses a powertrain claimed to be “UK-sourced”. “We will never make a vehicle with an internal combustion engine,” promises the company. That being said, Morris envisions other variants such as a pick-up truck, minibus and campervan to sit on the new modular platform.

The JE van’s chassis comes in lightweight carbon fibre with a pair of full-width rear doors and a sliding door on the nearside that provides easy access. The flat floor is said to fit two pallets, has 5.5 cubic metres of load space and Morris claims that the JE is “one of the lightest LCVs in the marketplace”.

The major selling point for the electric van will be its retro styling, derived from the Morris J-Type, achieving total production close to 50,000 units. Still, the British stress that the JE is neither a replica nor a continuation of the original Morris J-Type. Instead, it is a reinterpretation of the unique iconic design. The classic was produced in Great Britain from 1949 to 1960 by Morris and Austin respectively.

The new Morris JE e-van is making its debut at the London Design Museum today with the on-sale envisioned for late 2021. It is unknown whether Morris will only sell the electric transporter domestically or export to other markets in Europe.