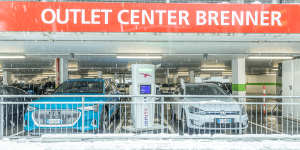 Ionity has officially put the fastest high power charging stations on the Brenner in South Tyrol into operation at the Brennero Outlet Center. It is the third of a total of 20 planned HPC locations in Italy.

The station at the Brenner has already been operational for a few days, and only the official opening has now taken place. The Carpi and Valdicciana charging parks have already gone into operation in the southern European country. The new columns are not set as usual at motorway service stations but in the multi-storey car park of the Outlet Center Brennero, located on the Brenner motorway.

Apart from the unusual location of the multi-storey car park, the site is similar to other Ionity stops: The four charging points exclusively use the CCS standard; the maximum charging capacity is 350 kW. This means that “significantly shorter charging times” are possible with appropriate vehicle design. So far, only the Porsche Taycan has relied on 800-volt technology; in 2021, Hyundai plans to introduce 800-volt models in the volume segment.

“The close cooperation with a location partner such as the Outlet Center Brennero has enabled Ionity to build HPC charging infrastructure at the Brenner on the important European transit route,” says Ionity-COO Markus Groll.

Ionity is a joint venture of the carmakers Daimler, Ford, BMW and Volkswagen. Hyundai-Kia recently came on board as strategic partner and shareholder. The JV is also in the process of deciding plans from 2020 onwards – whether it be the expansion of the existing charging stations with more charging stations, new locations or even HPC chargers in city centres is open at this stage (as we report in our newsletter).