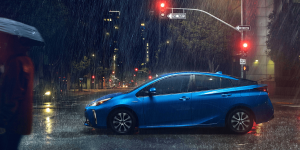 The California Department of General Services (DGS) has instructed government agencies to only procure vehicles from OEMs who are committed to California setting its own environmental standards as of January 1, 2020. GM, Fiat Chrysler and Toyota – who sided with Trump’s more lax emissions standards – now face concrete consequences. Toyota, in particular, is the focus of a massive international social media backlash, already affecting their sales.

The DGS guidelines now mean that manufacturers such as GM, Fiat Chrysler and Toyota, who sided with Trump government to weaken emissions standards already set by the Obama administration, will no longer be considered for vehicle procurement for state fleets in California from next year. California’s state vehicle fleet currently includes about 51,000 cars and trucks. Only about 6% of the fleet were BEVs or plug-in hybrids last year. That means that this new policy represents the potential of tens of thousands of all-electric and plug-in hybrid vehicle sales over the next few years.

Effective immediately, the California state government has stopped buying fossil-fuelled cars, with the exception being for public safety vehicles since electric versions for many speciality vehicles are not yet available. This means no Chevy Bolt’s and no Prius’, for example, while VW, BMW, Ford and Honda will enjoy increased electric vehicle sales. Some would say it was already clear which way the tide was turning. In September this year, a cross-party coalition of 24 governors representing more than half the U.S. population came together to call for a stronger national standard for clean cars.

In these decisive times, vehicle companies are finding which side of history they will be written into. In what is now turning out to be a prudent decision, VW, BMW, Ford and Honda already managed to sign a framework agreement with the California Air Resources Board (CARB) to reduce emissions back in July this year.

Not so lucky now are those companies who crumpled under pressure and acquiesced to Trump’s demands against the clear support for stricter emissions standards. Toyota, in particular, is now paying – literally – for its hedging of bets on the side of Trump’s administration. Social media is ablaze with calls to boycott Toyota & Trump: Many Toyota owners resent the fact that the company recently sided with the Trump government in an attempt to circumnavigate California’s right to its own environmental standards. Hashtags such as #ToyotaTrump, #Boycotttoyota and #ByeToyota capture the persisting sentiment online. Many previously loyal Toyota and Prius drivers are swearing off the brand forever.

Some say the #ToyotaTrump campaign is just its early days and that it could snowball into a major backlash. Electrek commented that it is already affecting revenues. While General Motors has made a stand for lower emissions in the past despite the most recent boo-boo, informed consumers who used to be Toyota’s biggest loyalists, have taken notice that Toyota has yet to put a purely electric vehicle on the US market. What also didn’t go unnoticed was Toyota luxury brand Lexus singing the praises of hybrids over purely electric vehicles. Now that Toyota tried to undermine higher fuel-efficiency standards just adds insult to injury.