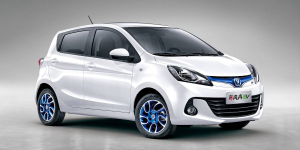 The subsidiary is now only 48.95 per cent owned by Changan Automobile – previously it was wholly owned by the parent company, but with the new investors this share was greatly diluted. Changan New Energy plans to invest a total of 10 billion yuan (1.28 billion euros) over the next three years, including a platform for electrified vehicles.

The new investors are not mentioned by name. We do know, that three of them will come from Chongqing, where Changan Automobile’s headquarters are located. The fourth investor is to come from Nanjing. The Chinese portal Gasgoo writes that according to local media reports, all investors are supported by state-owned assets controlled by local governments. But the report does not specify which source the unspecified local media relies on.

As a reason for the entry of external investors and the associated loss of a majority stake in the EV subsidiary, Changan cited the fierce competition on the Chinese NEV market with domestic and foreign manufacturers. It has thus become increasingly difficult for Changan to further develop its NEV business with its own resources. The “diversification of the equity structure” had therefore been necessary in order to “advance the business development of the NEV branch, increase operational efficiency and accelerate the integration of resources along the NEV supply chain”.

Changan had already established a battery production joint venture with BYD in 2018. At the end of 2017, Changan Automobile had announced that it would exclusively produce cars with electric motors from 2025 onwards. What the cooling of the NEV market after the expiry of some subsidies and the current entry of investors means for this project is currently not clear.