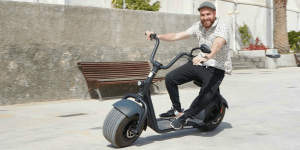 E-Bility GmbH, the company behind the German electric scooter manufacturer Kumpan Electric, has received an investment in the lower two-digit million range in a financing round and has also taken over the Berlin-based electric scooter company Scrooser.

The two transactions are closely linked: According to E-bility founder and CEO Patrik Tykesson, several other investors, who do not want to be named, participated in the financing round. There were also two new investors. Jörg and Johannes Haas, Scrooser’s previous shareholders, are now also part of E-Bility’s circle of investors. At the same time, E-Bility has taken over Scrooser but wants to continue to run the company and the brand.

Scrooser builds an innovative carving electric scooter and thus serves another segment like Kumpan Electric. According to E-Bility, “the product ranges of the two innovative electric scooter manufacturers complement each other perfectly and offer many synergy and diversification opportunities. Tykesson adds: “Thanks to a differentiated brand positioning, Scrosser offers us the opportunity to expand our product range and thus reach new target groups”. Tykesson had founded the company with his two brothers in 2010, and the trio says they still hold the majority of the shares after the financing round.

According to the previous shareholders, there are also some advantages for Scrooser in the new constellation. “With Kumpan Electric, we have found an experienced partner who has extensive expertise in e-mobility and who, like us, stands for high quality from Germany,” says Johannes Haas, who was Managing Director of Scrooser and, according to his statement, will continue to be so.

One of the possible synergy effects is that the batteries from the Kumpan models will also serve in the next Scrooser generation. With the additional capital from the financing round, the existing sales channels (B2B and B2C) for both brands are to be expanded – also internationally. Kumpan’s electric scooters will be sold to private customers, for example, but also to sharing fleets.

Northvolt CEO Peter Carlsson is one of the few investors in E-bility who have taken the floor. Of course, I’m delighted about this development,” says the ex-Tesla manager. “Both companies share the same values of sustainability, local production and the pursuit of a high level of market innovation.