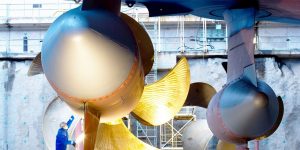 ABB has been awarded a €157 million contract to supply power, propulsion and digital solutions for six cruise ships from Genting Hong Kong. The hybrid vessels will be built in Germany.

Each of the 286-metre-long vessels will be powered by twin units of ABB’s Azipod electric propulsion system with a total capacity of 30 MW. The electric drive motor is in a submerged pod outside the ship hull and can rotate 360 degrees to increase manoeuvrability and operating efficiency. With the Azipod system, ABB is one of the six largest manufacturers of such systems.

Since the electricity for the electric motors onboard is generated from fossil fuels, they are hybrid ships despite the electric drive. However, the generators onboard the cruise ships just ordered will not be powered by ship diesel, but by liquid gas. ABB states that the Azipod system can save up to 20 per cent fuel compared to conventional shaft drives. Projected to the cruise segment, more than 900,000 tons of fuel will have been saved.

The ships, each with 15 decks, will be built by the shipping company MV Werften with locations in Wismar, Rostock and Stralsund in Germany and should be delivered in 2023 and 2024. They are to offer a passenger capacity of 1,000 to 4,000 passengers depending on luxury, premium or time class. Genting will operate these ships for global hotel brands wishing to enter the marine industry.