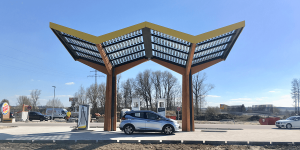 Namely the sites are in the Flemish provinces of Limburg, Flemish Brabant and Antwerp. In this region of Belgium, the service areas along the motorways are the responsibility of the Agentschap Wegen & Verkeer (AWV), the Flemish Road Transport Authority. According to the company, the approval granted by the AWV for the 13 sites is valid for 15 years.

The AWV justified the expansion of the fast-charging network with a growing interest in electric mobility. “More and more people want to invest in an electric car, according to a Vias study. One out of six Belgians indicates that he or she is considering to buy an electric car within three years,” says AWV spokeswoman Veva Daniels. “We support every initiative that increases confidence in electric or zero-emission driving,” she said.

Fastned currently has 114 stations in the Netherlands, Germany and the UK. To finance further expansion, Fastned raised 12 million euros from its recent bond issue. From 21 November to 12 December, investors were able to subscribe to the Fastned bonds, which have a maturity of five years and will bear interest at a rate of six per cent per annum.