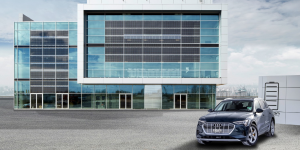 Audi has set up the “Brand Experience Center” at Munich Airport. The building has integrated solar cells and two power storage units from 2nd-life batteries. The electricity generated is also used for one of the largest charging parks in Europe.

The glass facades of the centre consist of almost 450 square meters of transparent photovoltaic elements with more than 1,650 solar cells that are expected to supply around 42,000 kWh of electricity annually. This solar electricity can be temporarily stored via two battery storage units that Audi has manufactured from Second Life batteries. This is not only used for the building itself, but also for charging electric vehicles. In their press release, the luxury carmaker did not specify the capacity of the second-life stationary system. In Berlin, the Ingolstadt-based company already operates a 1.9-MWh system.

In front of the building, there are a total of six charging points, including two 150-kilowatt fast chargers. These charging points complement Audi’s 78-point charging park at Munich Airport and, according to the manufacturer, make it one of the largest contiguous charging parks in Europe.

The building on the Audi Campus at Munich Airport is to be used as a training centre for international trade. Horst Hanschur, Head of Retail Business Development and Customer Services, hopes that the building will serve as a “field of experimentation and inspiration at the same time” for the worldwide sales network. The company’s goal of achieving CO2 neutrality by 2050 also calls for a balance sheet for retail.

In front of the Brand Experience Center, Audi has now installed what they call the walk-in “meteorite” set up for the market launch of the e-tron on the plaza in front of the airport. As a charging station, the meteorite is also part of the “Charge and Fly” campaign, in which drivers of a BEV or PHEV can charge for free until 20 December, regardless of brand. The e-tron meteorite will then serve as a public charging station.