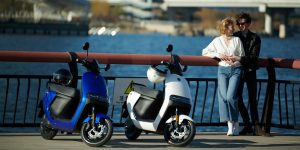 In Beijing, China’s Segway-Ninebot has just revealed new electric two-wheelers: the Ninebot eMoped – an electric moped-ebike (with pedals) in three variants; and a new electric scooter in five options called the Ninebot eScooter.

The company also presented prototypes of the Ninebot Apex – an electric motorbike, and a semi-autonomous version of the eScooter. Since its founding in 2015 when the Chinese Ninebot took over the US manufacturer Segway, the company has become the biggest kick-scooter sharing supplier for companies such as Lime and Bird. According to a prospectus filed in April this year, the company sold 1.6 million kick-scooters in 2018. Now Segway-Ninebot is fully utilising its expertise with light electric vehicles to expand its range. At the CES in Las Vegas at the beginning of next year, Segway-Ninebot plans to present the Ninebot eMoped small pedal electric moped scooter and the larger Ninebot eScooter electric moped scooter.

Firstly, to the electric moped scooter with electric bicycle capabilities: The vehicle, called Ninebot eMoped, is to be launched in three versions, which differ mainly in their range of 39, 60 and 75 kilometres (approx. 24, 37 and 47 miles). In all cases, the maximum speed is given as 25 km/h (15 mph), but this can be adjusted depending on local registration regulations. This flexibility, plus the fact that the Segway-Ninebot model has pedals, also allow the light electric vehicle to qualify as an e-bike, presumably since this may be useful for some subsidy and street regulation guidelines. The first image below shows pedals as well as a child seat.

The larger e-scooter, also to be launched at the CES in Las Vegas early next year, is to be offered as the Ninebot eScooter and will be available in no less than five drive versions. The entry-level model E80C still relies on lead batteries and has a maximum range of 90 kilometres (56 miles). The remaining versions rely on lithium-ion batteries. They will have a range of at least 100 kilometres – the E90 and E100 differ primarily in their different top speeds of 54 and 60 km/h respectively (34 and 37 miles). The E125 is supposed to be able to drive up to 75 km/h (37 mph) and is marketed with a range of almost 120 kilometres (75 miles). The top model E200P has two batteries and thus has a range of 200 kilometres (124 miles) and a top speed of 100 km/h (62 mph). Despite the battery, a large helmet should be able to be stowed under the seat. However, prices for the different versions are not yet given.

All models will have a matrix LED headlight and a digital display, regardless of the drive system. The electric-scooters also offer some connectivity functions, so the driver can wirelessly download updates, locate the vehicle or call up statistics on the trips. Both the eScooter and the eMoped should be able to be unlocked and started via smartphone.

“Not all devices connected to APPs are intelligent. Truly intelligent products should be easy to operate and even able to do the operations automatically”, commented Cid Wang, co-founder and President of Segway-Ninebot.

At the Bejing event, the company teased a semi-autonomous version of the eScooter, as well as an electric motorbike prototype called the Ninebot Apex, to “demonstrate Segway-Ninebot’s R&D strength and its vision for futuristic smart city transportations.” The Ninebot Apex prototype represents an electric motorbike with a top speed of 200 km/h. With this top speed and acceleration from 0 to 60 miles in 2.9 seconds, it is the fastest vehicle that Segway-Ninebot has ever developed, although the company did not indicate plans for series production.

The other concept presented was the semi-autonomous version of the eScooter, which has a roll compensation feature and can be called up autonomously by the owner via app, though here too, as with the Ninebot Apex electric motorbike, no mention of series production was made. Segway Ninebot has had some particular focus on autonomous light electric vehicles. In August this year the company presented an electric kick-scooter that can autonomously drive itself back to charging points and two autonomous delivery bots for indoor and outdoor use.

In their press release, Segway Ninebot informs us that they are also stretching their range with several light electric recreational vehicles, including their first electric dirt bike, but provided no further information about these models.