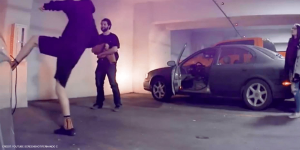 Two young men attempted to vandalize a charging Tesla in a parking garage. Not only did the attempt to forcibly remove the charging cable fail – Tesla’s ‘Sentry Mode’ recorded the incident and the video went viral on Youtube with over 700,000 hits within a few days.

There has been a rise in backlash to new technologies, which seem to be misunderstood. The level of violence and disdain we have seen for EV drivers is hard to explain simply as being a threat to a major industry, as the industry itself is adapting. Perhaps the motivation to rebel is rooted in a conscience that sees our environment being threatened, yet deigns not to address this issue, as burying all concerned evidence may be easier – in the very short term.