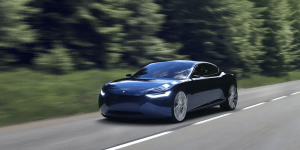 The Norwegian startup Fresco Motors has so far collected around 3,000 reservations for its planned electric sedan Reverie, which is to score points with a range of 1,000 kilometres and a top speed of 300 km/h.

According to Fresco, this corresponds to a reservation value of over 60 million euros. To generate further capital, Fresco Motors has launched a crowdfunding campaign and intends to raise one million euros through an investment round this year – also to obtain loans from banks. Norway has been leading the way in the sale of electric vehicles, and now the Nordic country may be home to its electric car production.

Fresco Motors received more than 1,500 of the approximately 3,000 reservations to date within one week. Most of them come from Norway itself. But there is also interest, for example, from the home of luxury cars, Germany: 71 of the first 1,500 reservation holders came from Germany.

The Norwegian startup’s plan is to build a prototype by the fourth quarter of 2020 and present it in early 2021. The limousine will be a modern five-seater with a timeless look. Although Fresco calls its debut model a luxury car, the company wants to set a counterpoint to the “good-looking electric cars that most people cannot afford.” In other words, the Reverie should be available for a moderate price.

Data on the sedan are otherwise still vague. It is known that it will be 1,401 mm high, 2,226 mm wide and 4,807 mm long. The wheelbase is estimated at 2,746 mm. As special features, the startup mentions charging panels, which will be installed on the underside of the vehicle to create the conditions for wireless charging. Fresco also speaks somewhat cryptically of an electric reserve in the style of a petrol can (“electric jerrycan”) – without giving any further details. Meanwhile, the company’s engineers want to do justice to the Viking tradition in the design. They will focus on an aggressive, minimalist look in the style of Norwegian history, they say.

Fresco Motors is very reflective when it comes to business development: “What we have learned from the troubles other EV startups have experienced is to control expenses and not fall into some of the other common traps,” says Theodore Pender, CFO and CLO of Fresco Motors. Especially in the US, he says, there is an attitude that from day one you have to act like a big, successful company to become a big, successful company. “That’s a very expensive way to do things,” Pender said, “and it’s risky because you burn through money so fast without being sure you’re getting the value you need.”