The energy turnaround in Germany’s electricity market is both a success story and proof of political unwillingness to achieve climate targets. What does this mean for the CO2 emissions from e-mobility?

Our contributor Christoph M. Schwarzer looks at the country’s electricity generation to clarify the (German) connections. Here, the battery-electric car is getting cleaner every day. The CO2 emissions from traction current are decreasing. The reason: A good 20 years ago, Germany initiated the energy turnaround in electricity generation. Away from the central combustion of fossil resources and money-burning nuclear power. Towards decentralised photovoltaic systems, wind turbines and biomass power plants. A development other countries like the UK are undertaking now as well. In an analysis, electrive.net shows current developments in Germany using illustrations from Fraunhofer ISE and classifies and evaluates them in conversation with Volker Quaschning, Professor for Renewable Energy Systems at the HTW Berlin.

The CO2 balance of energy that drives battery-electric cars plays a decisive role in decarbonisation and political climate goals. But is it even fair to take the energy mix as a basis for calculation in a country where public charging stations are only eligible for funding when they use green electricity, and most users also follow a low carbon lifestyle? “Yes, it is fair, because physically an electric car is charged from the electricity generation mix. But if you have a green electricity contract, you pay a company that invests in the energy turnaround. In my view, it is definitely desirable to use self-generated electricity from one’s own photovoltaic system,” says Professor Quaschning.

In 2019, the share of net electricity generation – that is, the amount of electricity available to the market, think at the socket and is not consumed in the power plant – was 46 per cent. The below graphics measures terra-watt hours. 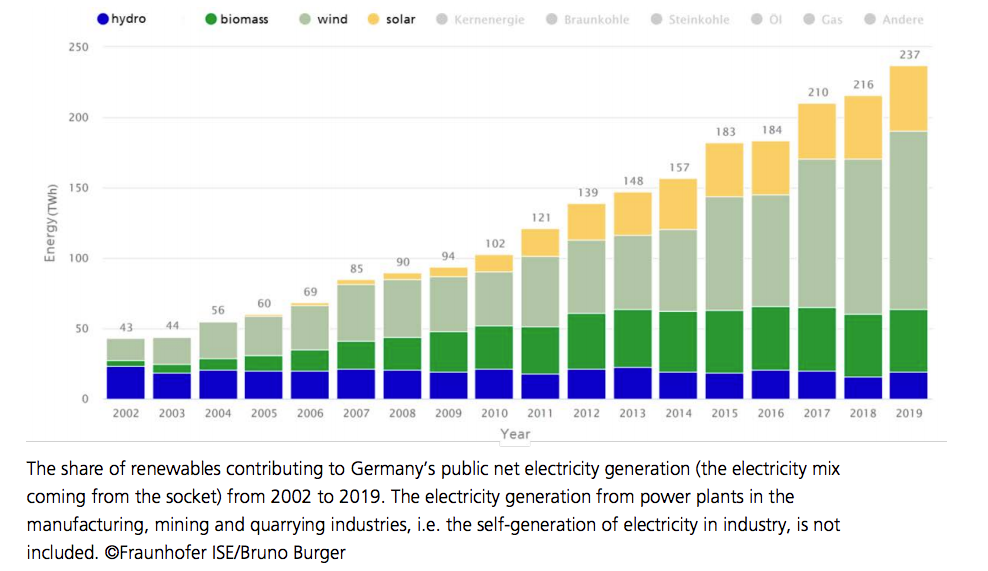 A small calculation example for a popular e-car: According to the portal spritmonitor.de a Tesla Model 3 consumes 18.1 kWh/100 km in real-life operation. Taking the 2018 value as a basis, this results in 85.8 g CO2 per km. Here, unlike with fossil fuels, upstream production is taken into account. The amount of CO2 emissions for oil production at the well, through ship transport, refinery and tanker can only be estimated – the ADAC Eco Test assumes around 20 per cent using EU data. A car with an internal combustion engine is therefore likely to emit 71.5 g of CO2 per km to achieve parity in CO2 emissions of electric vehicles. And that in turn would be 3.1 litres of petrol or 2.7 litres of diesel in real road traffic – but cars with combustion engines consume about twice as much.

There has also been an improvement in the percentage change from 2018 to 2019. Take wind energy, that increased by over 21%, the same is true for power from gas (+21%). The growth in wind energy can be attributed only partly to the expansion of facilities – it was merely a particularly windy year in Germany. The excess supply, in turn, forced coal-fired power plants to reduce capacity. Plus, the increase in electricity generation by gas power plants and the reduction in lignite (-22%) and pit coal (-33%), in turn, are also a result of carbon certificates becoming much more expensive. Also, gas prices were low in 2019, and gas-fired plants produce far fewer carbon emissions than coal-fired power plants and therefore require fewer carbon certificates. Besides, power plants can react more quickly to fluctuations in supply and demand. This political market control mechanism of carbon certificates, therefore works.

Looking back could create a pleasant feeling of satisfaction. And undoubtedly the status quo did not come about of its own accord but is the result of long-term efforts. Nevertheless, Professor Volker Quaschning is clear: “To comply with the Paris Climate Protection Agreement, the German government must commit itself to massive expansion targets for wind and solar energy.” As long as this is not the case, one must speak of “gross fraud against the population”.

For example, Quaschning fears that CO2 emissions per kWh of electricity will rise again as early as 2023. Germany is slowly taking nuclear power plants, which are low in CO2 from fossil fuels, off the grid, but at the same time does not add enough wind and solar energy. “The expansion must multiply”, he demands.

A further reason for the necessity of expansion is sector coupling: In the fossil fuel era, large power plants generated electricity. Domestic heat was generated from heating oil and natural gas. And transport on land, water and in the air relied entirely on crude oil products – with all the negative consequences from political dependence to tanker disasters to miserable wars.

With sector coupling, both heat and mobility increasingly use electricity. To stick with the battery-electric car: it is far more efficient than one with an internal combustion engine. And it is shifting energy production to the domestic market. But this also means that the total electricity consumption in Germany of about 500 terawatt-hours (TWh) will not decrease, but increase dramatically. Industry experts assume a demand of 1,000 to 1,800 TWh.

This again underscores Volker Quaschning’s demand: The expansion of wind and solar energy must significantly increase if you take climate protection seriously.

Finally, we recommend to all readers who want to know even more details on Germany’s electricity generation to check the report prepared by Professor Bruno Burger at the Fraunhofer Institute for Solar Energy Systems (ISE). For official data on the UK’s energy mix, see Ofgem here.

And for the energy turnaround sceptics who rave about the dark lull in winter – i.e. the presumed power cuts in the weeks around the solstice – take a look at Germany’s current net electricity generation in 2020 with power from renewables at 46.8%: 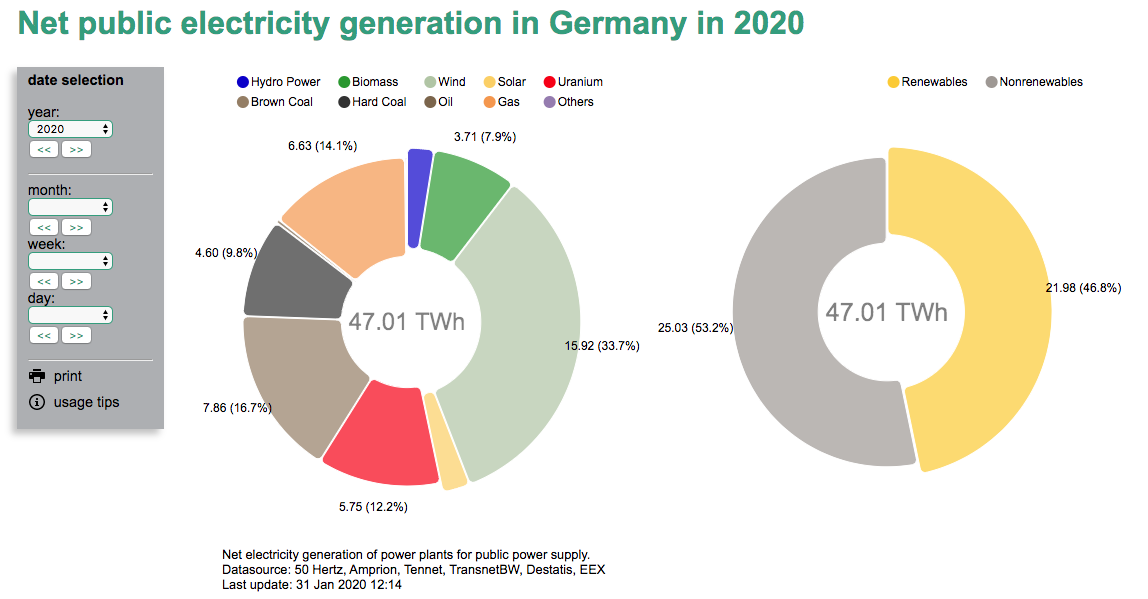