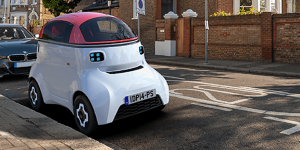 In the UK, Gordon Murray Design has developed the platform Motiv for autonomous electric vehicles in cooperation with Delta Motorsport and itMoves. The vehicle itself is designed as a small pod that can be adapted for multiple passengers, wheelchair users or for delivery services.

The electrically operated pod can currently be seen at the Move trade fair in London. According to Gordon Murray Design, it will be powered by a 20 kW electric motor and equipped with a 17.3 kWh battery pack with liquid cooling, which provides a range of up to 100 km. The study can also travel at speeds of up to 65 km/h, making it primarily suitable for use in cities and suburbs. A CCS rapid charging system is also on board.

In the version now presented, the motif offers a seat that is conveniently accessible via a folding door. Visually, the 2.54 x 1.31 x 1.63-metre battery-electric vehicles has a notably small window area – only narrow front and side windows allow a view of the interior and the outside. The reason for this is that the chassis of the motif – classified as a light vehicle (L7e) – consists of an aluminium structure that is intended to offer the same high level of crash safety as is prescribed for passenger cars.

The developers describe the chassis as “ultra-light”: without the battery installed in the underbody of the vehicle, the electric motor weighs no more than 450 kg. This low weight means that this flexible city vehicle can be homologated as a quadricycle, making it easier to produce than a car, which should result in shorter customer waiting times.

The Motiv was created to manoeuvre autonomously through traffic via sensors and radar systems. According to the developers, the platform can be modified for transporting goods in such a way that a maximum capacity of more than 1,100 litres is possible.

In order to initiate several pilot studies, the developer consortium is now seeking partnerships with autonomous technology providers. As far as the further schedule is concerned, the vehicle could be ready for series production within two to five years, estimates Gordon Murray Design. However, the legal framework for autonomous driving must be created in parallel. The development was partially financed by the British government’s IDP14 program.