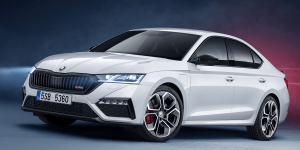 This is the stronger of the two PHEV variants that the VW Group offers in its current MQB models. As in the Golf 8 GTE, the system output is 180 kW, which results from the combination of the 1.4-litre TSI petrol engine with 110 kW (150 PS) and an 85 kW electric motor. The 13 kWh battery provides a purely electric range of up to 60 kilometres in the WLTP cycle. Prices have not yet been revealed.

In contrast to the Octavia RS iV, Škoda also offers the Octavia iV with the 150-kW PHEV. Without the RS label, the “normal” Octavia not only has 30 kW less system power but also dispenses with features such as the sports suspension, interior details or the sports model’s spoilers and rims.

The Czech subsidiary is thus following a similar path as their Spanish sister brand Seat in their compact model. The 150 kW PHEV is offered as Seat Leon, the 180 kW version under the sub-brand Cupra as Cupra Leon.

For the standard Octavia, Škoda will also be offering two mild-hybrid versions under the name e-TEC later this year, in addition to the well-known plug-in hybrid with 150 kW (204 hp) system output. The Golf 8 48-volt mild hybrids will have an output of 81 and 110 kW respectively. The battery capacity here is just 0.6 kWh.