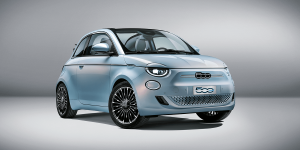 Fiat has just premiered the battery-electric 500, which is simply called the “new” 500. The differences to the previously sold combustion engine go beyond the drive system and the price for the small electric car is relatively high.

The new 500 has an important role to play in FCA electrification plans – in combination with some of Jeep’s recently introduced PHEVs, the electrified models are expected to reduce Fiat-Chrysler’s CO2 fleet emissions and thus avoid fines to the EU.

For the 500, Fiat is relying on the familiar retro design, albeit in a modified form. There will be a convertible version with a large fabric soft top of the three-door model: The Fiat 500C will be one of the first electric convertibles. The battery will have an energy capacity of 42 kWh. The electric motor has an output of 87 kW and the standard range is specified by the manufacturer as 320 kilometres. The little electric car can accelerate from 0 to 100 km/h Fiat in 9 seconds.

In its first electric model, Fiat offers three driving modes, “Normal”, “Range” and “Sherpa” that dictate the car’s energy consumption. FCA promises that the 500 will be able to recharge electricity for a range of 50 kilometres in five minutes at an appropriate charging station – or to 80 per cent in 35 minutes. The AC charging capacity of the electric 500 is 7.4 kW. The 500 also benefits from the new platform in terms of assistance systems, including Level 2 assisted for the first time.

Initially, the new 500 is available in “la Prima” equipment, i.e. the “first”. The first 500 vehicles per country will be issued as numbered editions. The model will start at prices of 37,900 euros includes extensive equipment, but also a wallbox with an output of 3 kW. Fiat accepts advance orders for this. Later, cheaper versions will follow, then also without wallbox. The exact scope and prices for this are not yet known, however, media speculate about entry prices of 30,000 Euros (before environmental bonus).