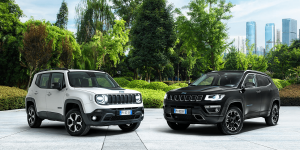 Jeep has just revealed the technical specifications for its first two plug-in hybrid models, the Compass and the Renegade. These two PHEVs with the abbreviation 4xe are now available online for pre-order as ‘First Edition’.

The system power of the PHEV drive is 177 kW, making the plug-in version the most powerful engine in both series. The respective performance data of the combustion engine and the electric motor are not mentioned separately. The purely electric range is somewhat underwhelming, stated as “up to 50 kilometres”.

The PHEV system is a transaxle hybrid: the gasoline engine drives only the front wheels via the automatic transmission, the electric motor is mounted on the rear axle. This means that the two 4xe models of Jeep – similar to the BMW 225xe and the Mini Countryman Cooper S E – can become four-wheel-drive when both engines are running simultaneously.

For charging, the Renegade and Compass 4xe comes with both a Schuko and a three-phase type 2 cable. The two models can apparently be charged with 3 kW ex-works, the charging process should take 3.5 hours. As an option, it should also be possible to increase the charging power to 7.4 kW, which should result in a charging time of 100 minutes – this would correspond to a battery capacity of about 12 kWh.

Both vehicles have the new driving modes Hybrid, Electric and E-Save. The maximum speed in purely electric mode is 130 km/h, in hybrid mode 200 km/h are possible.

As yet, only the prices for Germany are available. In Germany, the First Edition will have a starting price tag of 38,800 euros for the Renegade 4xe and 43,300 euros for the Compass 4xe. The Renegade is still in the homologation phase. From summer on, after the First Edition, the Limited, S and Trailhawk equipment will also be offered, but prices for these are not yet been released.