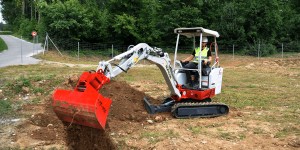 The Swiss construction company Suncar HK has announced the completion of a small series of ten new battery-electric excavators, developed in cooperation with Huppenkothen Baumaschinen AG.

Suncar announced the cooperative development for electrified utility vehicles last October, with this being the first result of the system application through third parties.

The TB216E electric mini excavator comes equipped with three lithium-ion battery modules. The vehicle is capable of uninterrupted operation for four hours. The manufacturer adds that with the on-board charging capacity of 6 kW, a brief recharging period “during the lunch break”  were sufficient to keep the electric excavator operational for a whole working day. The charging technology is rather simple: it uses existing three-phase mains supply at conventional CEE three-phase sockets. Full charging overnight is also possible at a single-phase 230 VAC household connection.

Suncar adds that the machines can be operated with the same technical knowledge as the original combustion counterparts, so no retraining for staff would be necessary. The excavator is designed for urban use and Suncar HK points to the C40 cities that have committed to sustainability, adding that interest in emissions-free construction concepts is growing. As a case in point, the company points out that Oslo already stipulated that all public construction sites must be built with fossil-free construction machinery.

“We want to make a contribution to the achievement of climate targets worldwide and to Switzerland’s Energy Strategy 2050,” says Stefan Schneider, Co-Managing Director of Suncar HK AG.