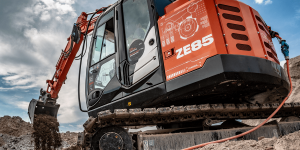 Swiss company Suncar HK has just launched its Fusion high-voltage distribution system for electrified machines and vehicles, making the systems that are already in use available to third parties. The system is to be available in two standard versions before the end of the year.

According to Suncar HK, the main components battery, charger, inverter, motor and optionally the fast-charging system can be connected to the high-voltage distribution system. The solution protects all inputs and outputs at both poles and protects the individual elements and connections from overloading. A typical target group of the company are operators of electrified machines and vehicles with increased demands on robustness and safety.

The focus is therefore primarily on construction machinery, commercial and municipal vehicles. Fusion450 and Fusion800 are two standard solutions with system voltages of 450 and 800 volts. Fusion450, for example, is already being used in Goldhofer’s Sherpa electric luggage tractor and Fusion800 in an electric excavator called ZE85.

Suncar HK is a startup company of ETH Zurich and a subsidiary of Huppenkothen who make conventional construction vehicles. The development office consists of a team of fifteen. In May, the company already made a name for itself together with Liebherr at the presentation of the world’s first battery-operated large rotary drilling rig. In November 2018, Suncar HK also developed two electric municipal vehicles with the Swiss manufacturer Meili.