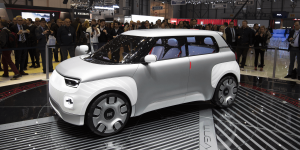 Fiat will apparently also build the Panda in its own electric version. The car manufacturer has apparently decided to put the Concept Centoventi that was presented in 2019 into series production.

When Fiat presented a preview of a possible electric Panda with the all-electric Concept Centoventi at the Geneva Motor Show last year, it was not yet clear whether the study would lead to a series model. “We are still working on it,” Fiat CEO Olivier François recently told AutoExpress. He said it was “another approach” for a fully electric car.

In series production, Fiat is likely to base its E-Panda on the platform of the electric Fiat 500, which was presented as a production model a few days ago. “When you invest in a new platform, and it is a completely new EV architecture, it is not for one car, so you will see it on other cars,” François continues. “It will be used to make the most of the investment, and used between nameplates and brands.”

Of course, it remains to be seen how many elements of the Centoventi will make it into the production model of the E-Panda. The design of the study was emphatically angular; Fiat also took a different approach to the interior at the time: There was only a driver’s seat and a back seat. Instead of the front passenger seat, there was a multifunctional bracket on which a seat, a tray, a child seat or a basket for pets could be mounted. The dashboard was perforated so that additional elements – a cup holder, smartphone holder or similar – could be easily attached there if desired.

It is also unclear how close the technical relationship will be with the new 500. This is now based (like the current Panda) on the modified version of the FCA small car platform, while the previous 500s with combustion engine still rely on the classic version of this platform. It is currently not clear whether Fiat will bring the electric drive (87 kW engine power, 42 kWh energy content of the battery, maximum 85 kW charging capacity) 1:1 into the electric-Panda or slightly vary it. However, due to the slightly higher weight and the higher air resistance (the body of the Panda is higher than that of the 500), the electric Panda will probably not reach the same WLTP range of 320 kilometres.