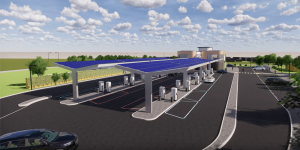 Gridserve has today announced that the first of a nationwide network of over 100 Electric Forecourts is now under construction and will open this summer. UK firm’s first solar-powered site in Essex will house 24 rapid chargers, a supermarket and an EV education centre.

In June last year, Gridserve revealed that planning permits had been submitted for the Electric Forecourts that will offer simultaneous rapid charging for fleets, commercial and private vehicles.

Now the ground has been broken on the construction site for the first Forecourt near Braintree in Essex where 24 ultra-fast charging bays are supported by batteries to enable the maximum power requirements of all chargers simultaneously.

The project has been partly funded by a £4.86m grant from Innovate UK, a government-backed agency that offers financial support to UK-based technology developers. The 2.5-acre electric vehicle motorway service station just off the A131 will be also be home to a small supermarket, coffee shop and lounge area with Wi-fi and meeting rooms.

The Forecourt will also feature an ‘education centre for electric vehicles’ to support drivers with offers of information, test drives and advice on the kind of vehicles that might best suit them. This is supposed to provide the confidence and support to accelerate the transition off polluting fuels.

Toddington Harper, CEO of Gridserve, said: “Many more people want to buy electric vehicles but are worried about how to charge them. We will help solve that challenge and deliver the confidence needed to make the switch to electric transport.”

Gridserve also currently in discussions with different local authorities around the UK. The company expects to have several more Forecourts in construction and many more into planning by the end of this year. Gridserve says it aims to have the full UK-wide network operational within five years.

Foreign Office Minister and MP for Braintree, James Cleverly, hailed Gridserve’s Electric Forecourt as “pioneering the world-class charging infrastructure that… will inspire people in towns and cities throughout the country to have the confidence to make the move to sustainable transport”.

Gridserve is also developing a number of solar farms, supported by batteries, to supply energy to its Electric Forecourts so that 100% of the electricity offered is clean. The company recently completed a 34.7MWp solar farm project at York with bifacial panels, sun trackers, and a 30MWh battery.