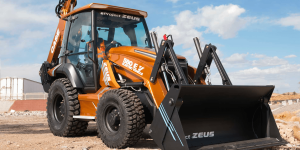 The US American construction equipment manufacturer CASE Construction Equipment has introduced Project Zeus: According to the manufacturer, the 580 EV is to be the construction industry’s first fully-electric backhoe loader.

Power and performance capacities of the 580 EV are said to stand equivalent to other diesel-powered backhoes in the manufacturer’s product line-up. As with all electric vehicles in comparison with their fossil-fuelled counterparts, CASE reminds us in their press release that the vehicles have considerably lower daily operating costs and are, of course, emission-free. So far, two units have already been sold in the United States.

Lower operating cost and emissions profile is not the only advantage CASE was quick to point out, as the electric motors pack a significantly faster punch: “At low idle a diesel engine has reduced torque and requires time for the engine to ramp up to meet the load demands. Electric motors, on the other hand, have instantaneous torque and peak torque available at every operating speed,” says Eric Zieser, director of global compact equipment product line.

The 580 EV runs on a 480-volt, 90 kWh lithium-ion battery pack, which can be charged with a 220 V/three-phase connection. CASE added that “applications will vary”, it is said that a single charge should be sufficient to operate a “common” 8-hour workday.

Another notable aspect of the 580 EV is that the battery separately powers the drivetrain and hydraulic motors, meaning that the hydraulic breakout forces are equal to diesel-powered machines and, according to CASE, showed improved performance during simultaneous loader and drivetrain operation.

CASE partnered with Michelin to integrate a specially developed 4-season backhoe tire which provides “excellent reliability and traction”, to further boost the 580 EV’s performance capacity. Partners for the electrification of the construction vehicles were Green Machine Equipment and Moog. CASE also received input from utilities and other businesses planning to convert significant portions of their fleets to fully electric backhoes.