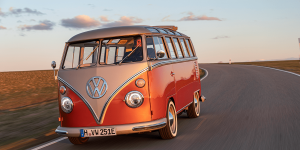 VW Commercial Vehicles digitally delivers new details on the e-Bulli based on the T1 announced at the beginning of March. The release makes clear, the electrified classic won’t remain a one-off as VWVC’s partner eClassics offers conversions.

The e-Bulli concept was scheduled to debut at the Techno-Classica. Still, since the trade fair has been postponed due to apparent reasons, VWCV now presents all details online and stresses an indeed important new fact: the electric vehicle will be available to buy for real. VWCV partner eClassics is planning to offer T1 conversions and T1 complete cars in the style of the new e-Bulli.

Just to recapture, the T1 also known as ‘Samba Bus’ or Bulli launched in 1966 and became an instant classic in Los Angeles and later in Europe. The travelling van has now been rebuilt and fitted with an electric drive system. Marketed as e-Bulli and first presented as a concept, VWCV said the new e-van is “a bridge between the historic T2 electric transporter (1972-1979) and the future ID. BUZZ (starting in 2022)”.

Now that eClassics is to offer the electric conversion utilising Volkswagen Group’s latest electric drive system components, they were able to set prices starting from 64,900 euros.

For this, you get a pretty premium interior with solid wood flooring. With a large folding roof, the overall effect of this electrified ‘Samba Bus’, says Volkswagen, is an “almost maritime character”.

Harder facts include the electric drive with 61 kW and 212 Nm and a new chassis. The rear-wheel-drive is twice as strong as the original T1’s combustion engine, and VWCV states that “this changes everything”. Or, a bit at least. The e-Bulli has an electronically capped top speed of 130 kph, while the old Samba stood at 105 kph.

Fast-charging will also be possible as the model comes with CCS and DC capability at 50 kW. VWCV claims this to result in charge times of 80 per cent in 40 minutes. The battery’s claimed usable energy capacity is 45 kWh, for a range of about 200 km. For travellers that does not sound like much but a start. The battery also supplies the on-board electronics. As in the new ID.3 and future ID.BUZZ, the high-voltage battery rides centrally in the vehicle floor.

All of the electric drive system’s standard parts are being made by Volkswagen Group Components in Kassel. The lithium-ion modules have been designed at the Braunschweig components site.

Also, the modified interior and exterior have been a group effort. The Volkswagen Commercial Vehicles design centre developed the new look and corresponding technical solutions in cooperation with VWCV Vintage Vehicles and the Communications department. Apart from the maritime looks inside, the redesigned chassis now has a multi-link front and rear axles with adjustable shock absorbers and coilover struts, plus a new rack-and-pinion steering system and four internally ventilated disc brakes.

eClassics are offering the T1 conversion, complete with redesigned front and rear axles as of today. T2 and T3 conversions are on offer too, and the company also holds a ready-to-fit parts kit for qualified dealers. Convert away!