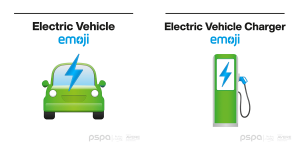 Last year, Volkswagen’s subsidiary Electrify America submitted a formal proposal to the Unicode Consortium to introduce an EV with a charging station as an emoji for smartphone keyboards. Now a new proposal has been published.

This time, the proposal comes from the Polish Alternative Fuel Association (PSPA), and officially asks for two emojis – one for EVs and one for chargers. As a combination, the initial image would probably make more sense, however as the technology grows to become more prevalent and commonplace, most people will also begin to recognize a charging station when they see one.
pspa.com.pl