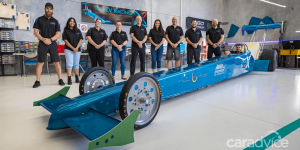 When it comes to vast distances, Australia is a country of superlatives. Western Australia’s capital Perth is the world’s most isolated city. Here, electric racing motors specialists HyperPower have developed a superlative motor. The QFM-360-X boasts 1,000 kW or 1,341 horsepower.

The Australian company has put four of these into an E-Dragster. The company aims to break records with the machine sporting a cumulative power of a whopping 4 MW or 5,364 HP. HyperPower aims to set speed and acceleration records with the massive dragster.

The electric dragster should reach a speed of 530 km/h in just 3.7 seconds. The team aims to set a top speed record of 612 km/h. But for Australia, with some of the world’s least dense, sprawling cities, complete car dependence in the majority of urban, suburban and rural areas, the motor’s other potential applications may be the real revolution.

And this is where it becomes really interesting: Designed to propel Hyperloop and light rail, hypercars and aerospace, the QFM-360-X motor is modular to suit different applications. With its vast distances, hyperloop and light rail are some of the most viable options for cost and energy effective zero-emissions inter-city and suburban transport. If necessity is the mother of all invention, Australia has a head start on that front.

On the front of energy-effective zero-emission transport solutions over vast distances, Australia recently became host to other electric range-enhancing developments: The newly formed Hyzon Motors is a hydrogen vehicle company focused on heavy-duty FCEVs and specifically fuel cell stacks exceeding 100kW. Hyzon’s vehicle line includes road-trains with a gross weight of up to 140 tonnes set for commercialisation in 2021 in Australia.

Also in March, the Fortescue Metals Group and ATCO Australia signed an agreement to explore the potential of fuel cell vehicle filling infrastructure in Western Australia. They will build and operate a hydrogen station in the Perth area, fueling a showcase fleet of Toyota Mirai. The project is designed with the possibility of broader deployment across the state.

For his part, Michael Fragomeni and his company HyperPower are “Developing partnerships in the uptake of our ultra-high-power propulsion components into commercial integration and continuing the expansion of our in-house production and intensive R&D programmes.” With the 1000 kW motor with only 43-centimetre / 17 inches in diameter and a modular structure for flexible application, the fast and furious Australians might have something.

With enormous potential for renewable energy in solar, wave and wind energy, plus an emerging hydrogen economy and powerful electric motor know-how, Western Australia has the chance to turn the tyranny of distance into innovation opportunities.