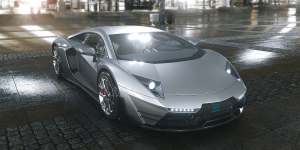 Tritium Automotive from Finland is working on a purely electric sports car with 500 kW power and a range of up to 300 kilometres. Initially only eleven units are planned – at a unit price of one million euros.

The special feature of the still nameless electric sports car from Tritium Automotive – not to be confused with the Australian charging station supplier Tritium Pty Ltd – is the customization capacity.

According to the makers, only the tubular frame including drive and battery as well as the two displays in the interior are fixed. The eleven customers will then be able to determine everything else themselves – whether they want a purist racing interior or a luxury ambience in the interior. The bonnet, tailgate, roof shape, doors, side panels and rims are also to be individually designed for each vehicle. The current renderings, which are very much reminiscent of a Lamborghini, are therefore only a kind of non-binding template.

Little is known about the technology of the tritium sports car at the moment. The Finnish company stated that the motor comes from “the best engine builders in the world”. But they do not mention any further details beyond the 500 kW power and 300 km range. Since the engine is spoken in singular, it is possible that tritium will only install an individual electric motor. Other electric sports cars rely on two or even four electric motors and thus arrive at four-digit performance figures.

The charm of the electric sports car from Tritium will be defined less by performance data for the car quartet, but more by its exclusivity. Eleven copies are not exactly common, in addition to the fact that buyers can have it designed according to their wishes and thus acquire real unique specimens. Moreover, the technology is not set in stone: Tritium wants to continuously revise its sports car and also bring the updates to the vehicles already delivered – at least that seems to be possible with eleven units.

But it is still open whether the schedule can be kept. The premiere of the car is currently planned for mid-June: The e-sports car is to be shown to potential buyers at the luxury fair Top Marques in Monaco. In Corona times, however, there is currently a big question mark behind the fair.