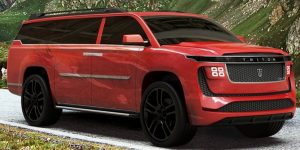 Triton Solar of New Jersey has announced a giant eight-seat electric SUV that will have a range of more than 700 miles (1,126 kilometers) on a 200-kWh battery. Pre-orders are already being taken, but there are also doubts about the project.

On the one hand, bold advertising is used for the ‘Model H’, which is fairly standard in the US American market, but there is no further available information about a production site or a start date, which casts doubts on the project’s seriousness. Even data like the 700-mile range has to be questioned, as the company does not even indicate in which cycle it was determined.

The technical data does provide some solid information: The 1,119 kW drive power is to be achieved by a total of four electric motors (one per wheel). This is quite realistically possible at 280 kW per motor. This should allow the large SUV should not only be able to accelerate to 100 kph in less than 3 seconds, but also enable a towing capacity of almost seven tonnes. The company has not yet provided any information on the charging capacity – certainly not an unimportant figure in view of the large energy storage required.

Another question mark presents itself with the name – although the company is called Triton Solar, the memo makes no mention of solar technology. The company has not made it clear whether they have also put solar cells in the large body of the Model H. Himanshu Patel, CEO of Triton Solar, only says in the memo that the project has been running for 18 months and that some international partnerships have been entered into.

By the way, the Triton Model H will cost 140,000 dollars. Thereof 5,000 dollars have to be transferred as a down payment. In order to make the reservation a binding order, another 135,000 dollars are due. “The first 100 pre-order customers will be delivered the Founder’s Edition, which shall have unique surprise features added on top of the standard features,” says the press release.