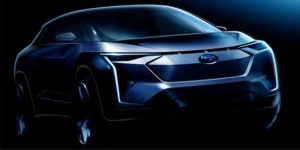 According to media reports, the first electric model of Subaru will be called Evoltis and will have its world premiere at the Tokyo Motor Show in October 2021. The electric SUV will be based on the electric vehicle platform developed by Subaru together with Toyota.

According to reports, the Evoltis will have a range of about 500 kilometers. Subaru gave a first preview of the model at a technology briefing in Tokyo at the beginning of this year. The vehicle should be about the same size as the SUV Crosstrek Hybrid, which is also a joint development of Subaru and Toyota (with technology of the Prius).

It is not yet clear is in which markets the Evoltis will be offered and whether it will carry this model designation everywhere. According to a US report, the Japanese company has already secured the naming rights in the USA in 2018.

Very little is known about the technology of the Evoltis so far. The electric vehicle platform is supposed to be suitable for “medium and large” cars, the first model is supposed to be a C-SUV – like the Evoltis. However, key data on possible battery capacities, charging capacities or engine layouts have not been communicated. With this cooperation, both groups want to reduce development costs, since the car-making giant Toyota is still hesitant about purely battery-electric cars and the small Subaru, on the other hand, has a hard time coping with such high investments on its own.

While the production cars usually look tamer than the vehicle concepts, the Evoltis could still get a very eye-catching design, as Carbuzz speculates. This should make the battery-electric model stand out from the rest of the product range and show its special features.