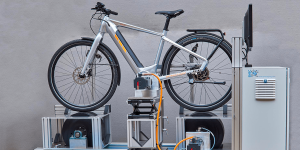 The test equipment manufacturer EMEC-Prototyping has reacted to the latest change in the type approval of S-pedelecs and has expanded its test benches to include the corresponding test capacity.

The background is a range test, according to WMTC (World Motorcycle Test Cycle), which has been mandatory since the beginning of the year. According to EMEC prototyping, the implementation of the driving cycle poses significant challenges for the test technology: “On the one hand, the test bench must have a high-performance class but also a very large control dynamic, since the test cycle includes frequent acceleration and deceleration/recuperation,” says a statement from the Dresden-based company.

To remember: For electric bicycles, the German Two-Wheeler Industry Association (ZIV), with the support of industry representatives, launched the “Standardized R200 Range Test”. For pedelecs with a limited top speed of 25 kph, this test is still valid. In contrast, the test procedure for all vehicles in the L1e-B, L2e or L6e classes, including speed pedelecs and pedal-assisted e-bikes with a top speed of up to 45 kph, will be changed from R200 to WMTC. The amendment has been in force since 1 January 2020, with the background that S-pedelecs and fast e-bikes belong to the category of mopeds.

EMEC-Prototyping’s chassis dynamometers now support both tests. “All vehicles up to 45 kph, according to the L Standard, can be tested. A highly dynamic servo system enables such a roller test rig. You can, of course, run all tests according to EN15194 (pedelec standard), including the R200 test,” confirms the company, whose customers, according to its information, include drive manufacturers and test institutes. In addition to selling its products, the Dresden-based company also offers testing services, including field tests. They also want to stay on the ball when it comes to future two-wheeler topics in the areas of networking and cargo.