Archer is developing an all-electric aircraft that can take off and land vertically (VTOL) and will carry four passengers over distances of up to 60 miles (almost 100 kilometres) at a speed of up to 250 km/h. According to Archer’s own statements, the startup is relying on current battery technologies. On its website, the company speaks of the “first commercially feasible electric VTOL aircraft.”

The startup gets a second glance for its personnel line-up. Archer is keen to draw attention to the fact that it has “attracted top talent in the industry”. The team currently consists of 40 engineers, “including talents from the competing eVTOL startups Joby, Airbus Vahana and Wisk”. Specifically, the Vice President of Engineering, Tom Muniz, and Geoff Bower are named as Chief Engineers, having joined Archer from equally titled positions at Wisk (Muniz) and Airbus Vahana (Bower) respectively. In the press release they are referred to as “eVTOL visionaries”.

Archer is founded and managed by Brett Adcock and Adam Goldstein. However, the two are not engineers, but serial entrepreneurs: Only recently they sold the marketplace startup Vettery to Adecco for over 100 million dollars.

The largest investor in the Palo Alto-based newcomer is Marc Lore, CEO of Walmart eCommerce. Lore has also founded several companies and made them into something bigger. In 2010, he sold Quidsi to Amazon for 550 million dollars, and most recently his e-commerce brand jet.com went to Walmart for 3.3 billion dollars, which also earned him his current position.

Lore says: “As we look towards the future of transportation, it’s essential to invest in solutions that work to reduce traffic congestion and environmental impact while providing consumers with the swiftest, safest alternatives.” He says, “I am a firm believer in Archer and the role it will play in ushering in the next age of urban travel.”

“Focused on speed, safety, range, and payload, with the ability to be mass manufactured and properly certified, Archer’s aircraft will be an industry change marker,” says Adam Goldstein. Apart from the data mentioned at the beginning, the announcement does not contain any other information about the aircraft.

However, Electrek portal has published a graph that contains some interesting data on the planned battery of the eVTOL. According to this, the battery will weigh about one ton (with a total weight of three tons) and will have a usable capacity of 143 kWh. Of this, 80 kWh are intended for flight (“cruise”), 26 kWh for hovering and 37 kWh as a reserve. The lower 16 kWh of the battery should not be used, the upper 28 kWh are planned as loss during the ageing of the battery.

How realistic these values are will become apparent during the test flights and the development to series production at the latest. At the beginning of this year there was strong criticism in Germany against the Munich startup Lilium that the promised data could not be kept. Aeronautical engineers calculated that Lilium was calculating with an unrealistic efficiency for the important hover flight.

The company will have to be quick if it wants to break into the market early since a number of companies are a little further down the track – although it is from exactly these companies that Archer has done its headhunting. In New Zealand, approval was given earlier this year to test VTOL flights from Wisk. The joint venture between Boeing and Kitty Hawk has already been given the green light to conduct flights with passengers. Back in California, Archer has not yet given any indication of when their aircraft will take off for the first time or transport passengers.

Update 14 June 2021: With Archer, another start-up for electric flight taxis introduced itself last year. Now the company is giving a preview of its first product: the electric vertical take-off vehicle is called Archer Maker and is expected to take off for commercial flights from 2024. 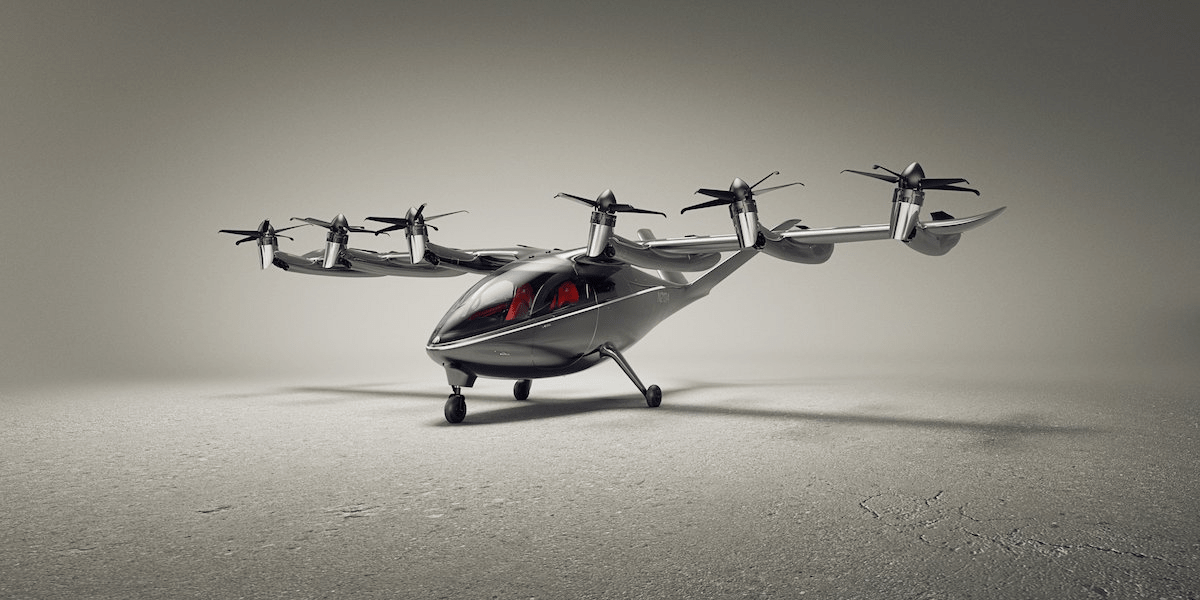 Archer claims a top speed of 150 mph (around 240 km/h) for the 325 kW Maker, with a range of up to 60 miles (just under 100 kilometres) thanks to a 75 kWh battery. United Airlines had announced in February 2021 that it would buy up to 200 eVTOL flight taxis from Archer together with the regional carrier Mesa Airlines and support the company in the development.