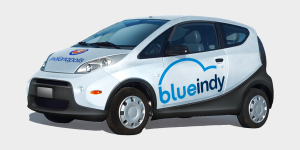 After the end of the e-car-sharing BlueIndy in Indianapolis, drone pictures now show the sad end of the perfectly good electric cars: They are being scrapped.

Apparently, not all of the small electric cars are headed for the metal recycling bin and some of them will be sent to Los Angeles for use there. At the same time, the city of Indianapolis is still gathering ideas for how to use the charging infrastructure left behind at roughly 400 parking spots.

We can see from the drone footage that a large number of BlueIndy’s cars ended up on the scrapyard. James Delgado, vice president of Blue Systems, part of the Bollore Group that operated BlueIndy said that key components and parts were removed and stored for later use.

“In addition to sending cars to Los Angeles, we will be re-purposing the (lithium-metal-polymer) batteries to be used in various energy storage projects we have around the world,” Delgado said in an email. “Our battery technology allows us to utilize the batteries for a variety of use cases,” he said, sounding very non-specific.

Recently, another sharing business made headlines for scrapping perfectly good electric vehicles: When Lime recently took over Uber’s electric bike and scooter business under the Jump brand it was revealed that thousands of the red Jump pedelecs are being scrapped.