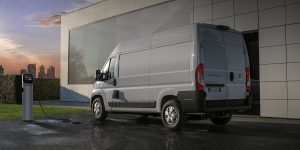 One year after showing the prototype and some technical data, Fiat Professional is unveiling the production version of the E-Ducato. The market launch will start “in the coming months” with the opening of the order books in the main European markets.

According to Fiat’s commercial vehicle division, the development of the new model has been able to continue using simulation tools despite all the difficulties related to the health emergency of recent months. Initially, the E-Ducato was to be available for order as early as the end of 2019, with deliveries starting this year. As of today, the electric transporter is now ready for field testing at selected customers. The market launch is then to follow in a few months, as mentioned above.

As far as the technical data are concerned, Fiat essentially confirms the performance data published last year. The electric Ducato will be available in all body versions that are also available with internal combustion engines – from passenger vans to panel vans to flatbeds, and all with different wheelbases. The panel van can have a loading space of between ten and 17 cubic meters, with a maximum payload of 1.95 tons.

The E-Ducato’s electric motor produces 90 kW and offers 280 Nm of torque and can be combined with a small battery consisting of three modules at 47 kWh or a larger battery based on five modules at 79 kWh. According to Fiat, the energy storage units support a range of “200 to over 330 kilometres” according to NEDC. Three driving modes are available to the users: In ‘Normal mode’ the E-Ducato provides “an optimum balance between performance and economy”, according to the manufacturer. In ‘Eco’ mode the van reduces power in favour of range, while in ‘Power’ the vehicle has more energy available for heavy-duty operations at the expense of range. To conserve the batteries, the maximum speed is always capped at 100 km/h.


Fiat has also created various options for the charging process. In the AC range, the Italians offer three variants: Standard charging with 7 kW and optional with 11 kW and 22 kW. The E-Ducato also supports DC rapid charging with 50 kW. The manufacturer estimates charging times at just under eight hours for 7 kW, only under five hours (small battery) or eight hours (large battery) for 11 kW, 2.5 or 4 hours for 22 kW and just under one or 1.5 hours (up to 80 per cent) for 50 kW.

Onboard the E-Ducato comes as standard with modern information and networking tools, including a control instrument that, among other things, adjusts the performance of the air conditioning system depending on the battery level. Also, there are networking features that make the E-Ducato compatible with fleet management systems on the vehicle side.

As is well known, Fiat is going its way with its E-transporter: the Ducato – first introduced 39 years ago – was once developed together with PSA. While Peugeot and Citroën now use BD Auto’s conversion options for their electric delivery vans, the Italians rely on their technology. The electric version of the Ducato is what they call the eMobility flagship of the commercial vehicle division. To mark the beginning of a “new electric era” at Fiat Professional, the E-Ducato bears a new logo: the letter E in blue combined with a D for Ducato in silver.

Fiat has not announced prices for the E-Ducato van.