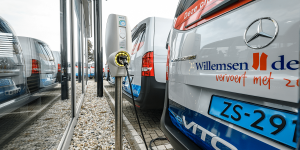 The Dutch municipality of Groningen plans to replace its 128 service vehicles with electric vehicles by 2025. The city will also install 74 smart-charging stations municipal buildings and is planning to build 350 more public charging stations in Groningen in the coming years.

In this way, the municipality wants to use its fleet as a model for citizens and companies to follow. This fleet is now to be converted to battery electric vehicles. But not exclusively, because Groningen is already using some fuel cell vehicles as a sweeper converted to H2 drive has been on the road there since 2017 reportedly.

“Our ambition is a clean, pleasant and healthy city. This includes an emission-free city centre in 2025,” says Alderman Glimina Chakor, responsible for sustainability and recycling in the city council.

Despite the occasional use of hydrogen and also previous efforts with gas drives and “Gas To Liquid” (GTL), electric vehicles are now to be used in all areas of the fleet. According to the city, this will not only save 3,725 tons of CO2 per year but also reduce fuel and maintenance costs: The EVs are cheaper to operate than gas-powered vehicles.

To keep the additional power required for the city fleet as low as possible, the municipality is relying on intelligent charging points and energy management between the building and the charging station. No further information is yet available on the 350 public charging stations also announced for Groningen.