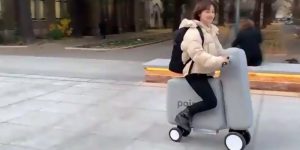 An electric scooter of a special kind is being developed at the University of Tokyo: The 5.5-kilo four-wheeled Poimo can be transported in a backpack and inflated for use.

What gives this vehicle an edge over other light electric mobility is definitely its weight. For example, one of the lightest, foldable electric bicycles, the Gocycle weighs 16,5kg and the best foldable bicycles without an electric motor seem to manage around 10 kg. That means that this inflatable light electric vehicle does indeed offer a lighter option with its 5.5 kgs.

The Poimo from Tokyo is supposed to inflate within a few minutes, but with an electric pump. This begs the question where one might find a power-point between the train station and the street. What neither of our source articles mention is how long it would take to blow up the Poimo with a regular foot pump.

Poimo was initiated as a result of a discussion between researchers from Tokyo University at a research camp. They discussed the benefits of a light electric vehicle that is safe for other road users and light enough to be truly portable when not in use.

The designers say that the Poimo’s soft body will better protect pedestrians as well as the rider in the event of an accident, creating a “new relationship between people and mobility”.

While the inflatable nature of this vehicle makes it safer for pedestrians, it obviously makes the scooter driver no safer against cars. One would assume however that this kind of vehicle would be most used in inner cities where speed limits are reduced and car drivers are accustomed to sharing the roads with other users.

The researchers are also saying that the inflatable characteristic of the scooter also means it can be easily customised. The body of the Piomo electric scooter is made from “pasted together” fabrics, so theoretically, the user can make it into whatever shape they desire. Another aspect that may change from the above-shown prototype is that the researchers are claiming that the final product will be even lighter and more portable.

A little Changli drives just fine for around $1,200