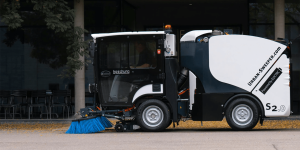 The vehicle is the result of cooperation between sweeper manufacturer Boschung and the American company Autowise.ai, a specialist in autonomous drive technology with a focus on cleaning systems. The Urban-Sweeper S2.0 is equipped with two traction motors and a battery with a capacity of 54.4 kWh for a full work shift, as well as an onboard charger with a charging capacity of 4.8 kW. At a standard charging station, the sweeper can be charged in eight hours, but a DC charge of 23.1 kW in two hours is also possible using a unique supercharger.

According to Boschung, at 1.15 metres the sweeper is 15 centimetres narrower than the usual models in the same class. In addition to the drive train, the battery that is mounted directly under the two cubic metre dirt container also supplies the two brooms (or three brooms) and a fully electric turbine. Boschung gives a warranty of three years or 2,500 hours – whichever comes first – on the battery, which is equipped with temperature management.

The machine reaches a maximum speed of 40 km/h, with Boschung specifying a working speed of up to 18 km/h. The payload is 1,200 kilograms. To move autonomously, the Urban-Sweeper S2.0 uses a combination of lidars, cameras, radar and GPS antennas to sense its way forward. “The precise and efficient detection algorithm enables the sweeper to detect all visible objects simultaneously,” says Boschung. This means that it can not only be used in demarcated areas, but with a level 5 certification, it can also sweep safely on public roads. Alternatively, a driver can sit in the vehicle cabin and operate the machine manually.

In addition to the broom system, which Boschung classifies as “summer equipment”, the model can also be supplied with a front roller broom (“winter equipment”) for removing snow. Boschung has not provided information on the vehicle’s price. However, the machine can already be ordered and delivered: In Gelsenkirchen, for example, five units of the Urban Sweeper S2.0 have recently been put into operation by the municipal service company Gelsendienste.

“The procurement process was preceded by intensive testing of various models,” explains plant manager Ulrich W. Husemann. “In addition, we have also had a close exchange of information with other municipal companies that are already using vehicles of the same type and have all reported very good experiences in everyday practice”. The Gelsenkirchen-based service company did provide information on the investment so that we can get an idea of the price one can expect to pay: the investment amounted to 1.15 million euros or 230,000 euros per machine. In the case of the Gelsenkirchen acquisition, the German government subsidised 90 per cent of the additional costs compared to comparable conventional vehicles.